All sorts of things have been happening at home, most of them small – kindergarten stories, a plethora of destruction, changes around the house as I purged and purged some more. Probably the biggest change is that I started studying, an online graphic design course that I attempted six years ago and gave up as I was too busy at the time. But my teacher happened to contact me a few weeks ago and I decided to give it another go.

So that’s my chief goal for April – catching up on assignments (the course started in February, so I’m a bit behind), and hopefully getting ahead for when I go to Europe later this year.

• I’ve got some sewing projects in the works, things like altering some too-small sweaters by adding lace panels in the back, and getting started on a blush pink ruffled top for cooler weather.

• Practicing my drawing – both typography and little sketches, like this one I drew up the other day:

• Finishing my lady cave/workroom, and posting about it – I’ve got curtains, a new rug, cushions, pencil holders in the appropriate colour scheme…..this is my plan, but I don’t know if I’ll end up with it. All the clean laundry and confiscated toys ruin the effect. 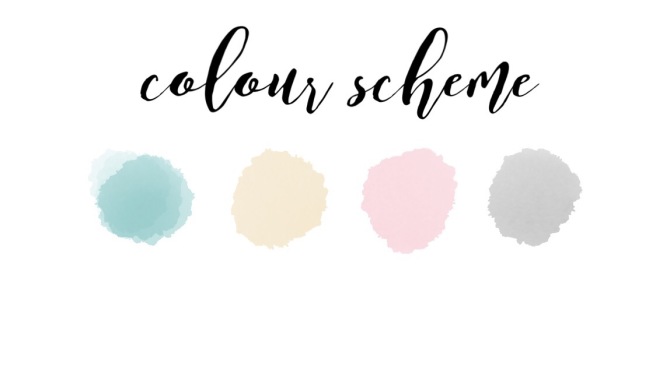 • Putting up a gallery wall – I finally framed a bunch of artwork and photos I’ve had for years, but I’m still undecided about where to put them. In the living room where they can be pulled off the wall by inquisitive fingers? Or in my office space, where they’re safe, but I’ll hardly ever see them?

• Spending a bit of time on my poor novel, Black Sapphire Bay – I knocked out 30K, handwritten words back in November, and I still haven’t typed them all up yet. So spending an hour a day doing that is on the agenda, too.

• some kind of photography project. Much as I love my kids I’m a bit sick of photographing them. Yeah, cute face, snot, stupid faces, wriggling the entire time, trying to run off with my lenses…..I loved the boho photo shoot I did with my sister the other day but then I have to hang out with her, euch. {Only saying that bc I know she reads my posts} There’s a lonely-looking lavender bush outside I’ve been meaning to use. Maybe in some kind of flatlay. Idk.

Anyway, that’s about it for me. I’m not going to write down stuff like cleaning dried Weetbix off the floor, because….ya know.