At the beginning of the year, while I was still pregnant, I spent a bit of time planning out the coming 12 months with birthdays, holidays, baby milestones, seasonal changes, etc. It was a combination of planning and goal-setting and just a reminder for me to record the passing time in a more meaningful way. Time passes very slowly on a daily basis when you’re the mother to small children. They seem to wake up earlier and earlier every morning and the hours my husband spends at uni and work seem to be getting longer (although that could actually be the case with him….) You feel like you’re dragging your feet in a constant, monotonous grind of changing nappies and too-short showers and scraping bits of cereal off the kitchen floor. And then all of a sudden you blink and it’s April and autumnal and you haven’t noticed the time passing. And in seven months, your eldest child turns four, and a few months after that he starts pre-school (or kindergarten or whatever they call it in my state).

So far I have not excelled at the whole marking the passing of time in a meaningful way. I have realised that we probably won’t sit down to do craft very often (read: ever) and I don’t have time to bake muffins every day and be one of those parents who keeps their children involved in cooking so they learn #lifeskills and #nutrition and therefore won’t be fussy eaters. Nope. Just nope. Not happening. (Note: I need to unfollow people on Instagram posting photos of the chia-laced cake they made with their well-behaved 2-year-old three seconds after giving birth).

Kids don’t need muffins. They don’t need handmade finger puppets. They are okay with toasted sandwiches three days in a row and playing outside in the dirt. 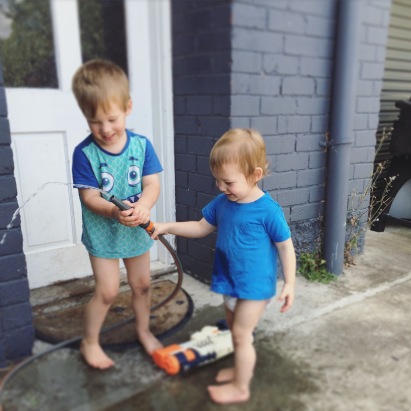 And they don’t need me there sitting in the grass blowing bubbles and making memories. They can have a perfectly happy childhood without specific memory worthy moments involving craft or structured, supervised, involved playtime.

I think. I don’t actually know. That’s just what I’m telling myself. They’ll learn all that shit at pre-school. Which is awesome, but since I was homeschooled and have always maintained that parents are the first teachers to their children, I do feel like I’m opting out of some responsibility towards my kids. And books. I know I’m supposed to read books and so on but when I have the opportunity – ie when the baby is sleeping – I’m sick of child-wrangling and just want to be left alooone for ten minutes without having to read the half-book my toddler shoves in my face. Only half a book, because he ate the other half.

That’s another thing. Are all kids really destructive or is it just mine? Are boys worse than girls? Because mine will literally eat their felt pens, snap their crayons in half, grind chalk into the carpet, tear their books down the spine, empty their entire box of toys onto the floor and lose them all under the couch. And then spend all morning building towers out of toilet paper rolls. WOULDN’T IT BE NICE IF THEY HAD SOME TOYS SPECIFICALLY MADE FOR BUILDING TOWERS, my husband said when he saw them. They don’t seem happy unless they’re doing something they’re not supposed to.

And in the midst of all this, feeling not quite like a failure, but questioning whether or not I was doing enough, or if I was just being lazy – because back in my day my kids ate everything on their plate and I spoon fed my kids until they could feed themselves properly so they never made a mess and I went out every day to playgroups when my kids were young and they need to be socialising and what kind of songs do you sing to them? (Answer: nothing, they learn their songs from Play School) and let’s talk about getting you through TAFE so you can become a hairdresser because that’s better than no career and you earn nothing at the moment so your time is worth nothing I had Sebastian’s 8 week check with the child health nurse. I had someone lovely, thank goodness. But Sebastian has not grown any taller since his last check, and he’s gained 200 grams in the last two weeks, instead of the 500 grams we were expecting (according to his regular weight gain). We put it down to a slightly lowered milk supply. I’ve had a cold for the last ten days and haven’t felt like eating. I’ve been running a low-grade fever most of the time and also overheating really quickly and dealing with night sweats (all from hormones) so I’m probably dehydrated most of the time. The lack of milk explained Seb’s sudden catnapping habit during the day. I also had that trip to the emergency department, which I’ve never done before. The health nurse said just thinking about going to the ER is enough to make her feel like crying. So when we did the post-natal mental health test I wasn’t at all surprised when she checked the results and carefully said “Your score is a little higher than normal….”

I have been feeling rubbish, but only since I’ve been sick. I was perfectly fine before than. We’ve just had a crappy couple of weeks. She just said to make sure I go to my GP if it gets any worse, which I had already decided to do.

It just reminded me that other people do not know what it’s like to be you, with your children, and your particular personality or state of mind. People forget what it’s like to have very young children, or what it’s like recovering from birth. And they only see my kids when they’re being well-behaved. My boys are always angelic when we’re at someone else’s house. They play together quietly, they’re completely entertained by their toys, and they pack it all away before going home without complaint. At home, it’s Destruction mode. It’s Torture Brother, Jump On The Baby, Totally Ignore Mum mode. Other people don’t get it. And both my kids are smart.

And for me, right at this moment, it’s enough that I remember to eat and drink to keep my baby healthy. That’s the only thing I have to do, even if other people don’t always realise.