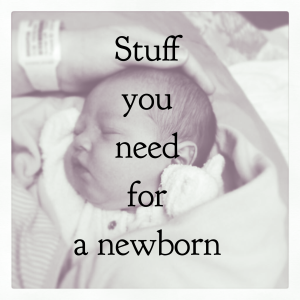 I’m 38 weeks as I type this, it’s the middle of summer, and I don’t have my baby ‘stuff’ organised yet. I’m not even talking nursery here – this bubba will get a couple drawers in the boys’ room and that’s about it. So being exhausted, completely disorganized, and not having much {any} extra room for all that baby crap I usually pull out while I’m pregnant, I’ve come up with a very pared-back list of essentials that I have to have ready to go when we bring baby home.

I have a bassinet and cot, both of which were given to us by relatives. I’m only bringing out the bassinet now as it’s obviously much smaller and I prefer it for newborns. {If you buy or receive a second-hand cot or bassinet, it’s recommended that you buy a new mattress}. I like to have two mattress protectors and three fitted sheets – not much point in having a top sheet for little babies, and they tend to come loose pretty quickly anyway. I’ve ordered these fitted sheets because I like to live on the edge and buy baby stuff at the last minute and they’re pretty cute.

Since baby is due in summer, I’m getting 3 lightweight, muslin swaddles – this brand carries come gorgeous neutrals and patterns – and in winter, I’d use 3 jersey wraps – I use the Bubba Blue wraps. Remember you can always buy more if you need it! Even if you don’t end up swaddling much, these are useful as emergency spit up cloths, breastfeeding covers, change cloths, play mats, or an extra layer when you’re going in and out a lot. I’ll have a few heavier blankets on hand just in case and I’m also buying a summer sleeping bag (I’ve heard good things about the Love To Dream swaddles).

I have lots of bunny rugs and wraps and patchwork blankets and quilts that I know I just won’t use. I’ll keep out one patchwork blanket as a play rug to use on the floor for tummy time and that’s it.

I have a capsule that’s suitable from birth to 6 months and once baby grows out of that, I’ll buy a car seat that’s suitable for rear-facing up to 12 months and then forward facing up to 4 years. If I was buying my first car seat all over again, I’d skip the capsule and go straight onto a convertible car seat – one that’s suitable from birth, obviously. Capsules are heavy to carry around, especially right after you give birth, and while I often carried a sleeping baby from the car to our house in the capsule, they almost never stayed asleep once we were inside. It’s also another thing to have to store once baby grows out of it.

All car seats sold in Australia meet current safety requirements, by the way, and correct installation is the most important safety factor, rather than brand or price range. Rear-facing seats offer a great deal more impact protection, too.

Newborns can go through a huge amount of clothes per day. Projectile vomiting, regular vomiting, weeing during nappy changes, weeing out the side of their nappies, poo explosions, leaking breastmilk during a feed….you get the idea.

I like to have a large quantity on hand, especially since I won’t get around to doing washing very often, but only very basic stuff. To start off with, I have about 10 newborn all-in-ones, mostly the stretch terry kind with foldover cuffs so baby doesn’t need mittens, and 10 singlets. I’m going to want some short-sleeved or sleeveless all-in-ones for this baby as well, and maybe a sunhat instead of the usual stretchy beanies.

I *don’t* want a whole lot of mittens, socks, hats, bibs, cardigans, cute onsies with buttons down the back, jeans, overalls, etc. There’s really no point buying cute or expensive outfits in newborn size. Both my boys were baptised around 6 weeks, and I ended up having to buy an outfit for them the week of the event, because they had grown out of whatever I bought beforehand.

I have another 10 or so all-in-ones in 000/0-3 month size and some larger singlets as well. That’s all I’m getting out and washing for now – I can pull out the next size when baby needs them.

I have a changing table which I almost never use – always end up changing my babies on the couch or floor – but I do use the bathtub that came with it. Look for one with a plug so you can drain it into the sink or whatever, instead of tipping it out. Otherwise you can use the sink or wipe baby down with a damp cloth and a bowl of water (which is probably what I’ll do until baby is big enough to put in the bath with my toddlers). Personally, I hate giving newborn babies baths. Mine both hated it so they screamed the entire time, plus it’s so time consuming – everything takes me f o r e v e r to do when I’ve just had a baby.

Other bath stuff: 2 towels – I don’t usually use baby towels, as they’re often too small and the hoods are pretty useless – so just 2 soft, well-sized towels will do. A couple of face washers, cotton wool, a gentle baby wash (I use the Gaia brand) and a plain moisturizer for dry patches or cradle cap (you can use plain coconut butter or olive or almond oil or something). Also, a bath thermometer, so I don’t freak out about it being way too cold or too hot, etc.

I’m only going to buy 1 box of newborn sized nappies (Huggies brand) as I don’t know how long baby will use them for. Grocery stores actually sell nappies after you have a baby – I know, right? And people often bring a box of nappies when they visit. My husband is used to buying them so I can trust him to bring home the right ones. If you do buy nappies in advance, keep the receipt and tape it to the box in case you need to return them.

I’ll have 3 or 4 packs of super-gentle, natural baby wipes on hand and a padded wipeable change mat.

I wrote a separate post on nappy bags, which you can read here; I ended up buying mine from Total Bag Envy, because they had a buy one, get one free deal on that was too good to pass up ;P As babies get older, you need a lot less stuff to carry around, but for newborns you always need loads of nappies and spare clothes and nursing pads etc, so buy one that’s big enough. (I also need to cart around spare nappies and sippies for my two toddlers so a big bag was important!)

I’m planning to breastfeed, so I mostly just need a stack of nursing pads and some burping cloths (the old-fashioned square kind they used for cloth nappies work great). I bought a breast pump during my first pregnancy but have never had much success with pumping, so I won’t bother unpacking all the bits and pieces, or buying bottles.

I know some people warn against using pacifiers on newborns in case of nipple confusion, but I didn’t have a problem with using one for my second baby. My first refused to take one! I have three or four hanging around various parts of the house that need to be collected and sterilized before being used for a newborn. And I’ll need some to give to my toddlers when they decide they NEED one as well. They’ll grow out of that quickly, but I know they’ll ask for one at first.

By this, I mean a rocker, swing, play mat, etc where you can put baby down while you get something to eat or wipe vomit off your shoulder or whatever. I do have a rocker, but neither of my boys were particularly keen on it, so I’ll probably just use the capsule from our car seat. It acts as a rocker when it’s detached and has a carry handle, so I can take it into the bathroom with me if I need to (mostly to keep the baby safe from his brothers while I’m showering). There are loads of swings, rockers, jumpers etc on the market but you only need ONE. They also take up a lot of space when baby grows out of them.

I’m not hugely into baby wearing, but for the newborn stage it can be really useful. There’s a lot of things you can’t do while wearing a baby – like cooking over the stove, or anything that involves bending over (vacuuming, loading the dishwasher, washing machine etc) – but it’s really helpful for just fixing breakfast for your toddlers or other times you need two hands and baby just WON’T go down. Even doing your hair or makeup or making a phone call or finding yourself something to eat. I plan to use mine when we go grocery shopping, so I can have my toddlers in the trolley seats and carry baby but still have my hands free. Other women swear by it for getting restless babies to sleep. I’ve bought myself a soft wrap from Chekoh, as I only plan to use it for the newborn stage, and I like the style and colour.

So…I think that’s it! Now I just have to find the bassinet stand and get husband to install the capsule…..living on the edge here.