I’m 26 weeks and a few days as I write this, and it’s the last day of October – kind of exciting that November is so close, and I only have a few weeks left in the second trimester. Looking forward to Christmas but not looking forward to getting bigger and slower (especially in hot weather).

I did finally finish organising our spare room today – it’s taken so long, and kept getting filled up and cluttered with random junk I cleared out of all our other rooms. I’ve managed to clear off my desk and whittled our junk down to just two plastic storage crates, which is a lot more manageable than twelve. I’ve also got some space on top of this big cedar chest where I can put down a drop sheet and finish painting or varnishing – a lot more comfortable than bending over or kneeling on the floor. 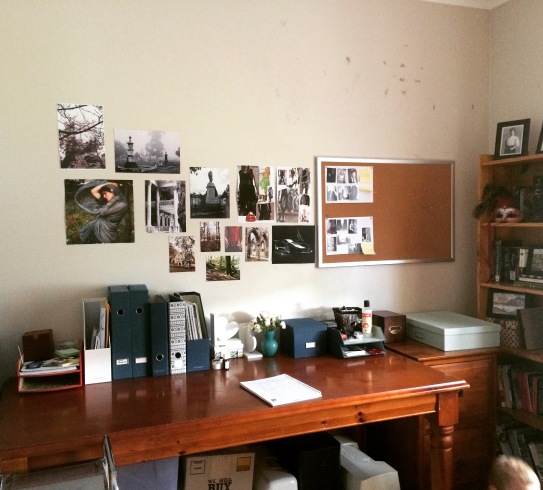 So tidy! And it’s going to stay like that…right?

I had the glucose tolerance test earlier this week, which is always fun….not. They’ve changed the procedure, too. For my previous pregnancies it only involved taking the glucose drink, sitting for an hour, and then having one blood test at the end. This time they took a blood test first, then gave me the glucosan (which tastes like really, really overly sweet Sprite), and then took further tests after one and two hours. I used up the two magazines I bought before hand and was bored and SO TIRED for the rest of it. I’d had an early start plus no breakfast, of course, and Ronan had been sick the night before with his cough and chest infection. He likes to combine coughs with projectile vomiting his 11pm bottle – only that bottle, none others – so I wasn’t feeling particularly great.

But on the upside – I had some parcels delivered recently, one from Queen Bee containing a very pretty Seraphine dress and Esprit jeans, both green. Apparently I’m into green now :p the maternity jeans are amazing, so comfortable, and one of the only pairs I’ve tried that are cut high enough over your backside so that you’re not constantly showing the stretch panel – which has no elastic which is awesome because it doesn’t dig in anywhere or create weird lines under your tops. 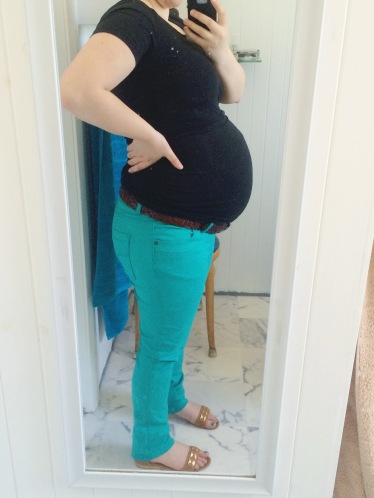 The other upside was getting to go shopping with the gremlins, or the husband, so I could eat cake and a chai latte frappe (with whipped cream) in silence and wander through Priceline aisles without anyone hurrying me along. I found some gorgeous new makeup, including a new BB cream by Innoxa – my current one is Nude by Nature but my skin has started reacting badly, so I needed a new one. I bought the Face Of Australia blush/illuminator in Angel Blush, which according to LoveFace Beauty is a cheaper version of the famous Nars illuminator in Orgasm. (I spend a lot of time stalking the Love Face blog, btw. She has a lot of great skincare & makeup reviews, a lot of them natural or semi-natural, but not in a hippy way – just a “this stuff is good for your skin” way.) I put on a full face of makeup the next day, and it looked SO good. So glowy and dewy and healthy all the adjectives you want to describe your skin. None of the dull, grey, patchy face I’m used to seeing lately.

See all the glow??

I also picked up a bunch of other stuff, mostly homewares, that have been on my list for a while. Sleeping is becoming uncomfortable, so I picked up a Euro pillow from Harris Scarfe. I haven’t come across a pregnancy pillow that I liked the look of; they all seem too big (like those massive curling body pillows that wrap all the way around you) or too small and hard, like the little belly support pillows. I tend to lie halfway between side and stomach, so I really just want something to hug. And new sheets and cushions and a shoe rack, because the cube shelf I used just wasn’t cutting it anymore. I did our bed up with all the pillows and crap and it looked quite Pinterest-worthy, if I do say so myself.

Now, onto the actual baby stuff – this is supposed to be a pregnancy update, after all…not too many symptoms, just being tired and puffed out easily, and my feet get really sore by the end of the day. Lots of toilet trips, but I’m used to that; a bit of Restless Leg Syndrome, though it usually goes away by the time I go to bed. I rub on a body oil with lots of lavender added to it over my calves and that seems to stop the RLS right away. Lots of kicks. And lots of Braxton Hicks, especially in the evening/after I go to bed. More than I remember with the last two.

Craving: Cake! And lemon. I can basically eat lemons by the slice, which is a terrible habit as its so destructive to your teeth.

Eating: Quite a bit these days. A lot of turkey, cranberry and brie cheese sandwiches (trying to break the lunch boredom). And fresh mango with a really good vanilla ice cream. The mangoes are beautiful at the moment – velvety, buttery soft. So good.

Drinking: A lot of water with lemon slices and mint leaves. Sometimes soda water with passionfruit or lime cordial in the evenings – if it’s cold enough, it still feels like a DRINK even without alcohol.

Over it: The lack of sleep. I’m used to being a bit tired, since Ronan never sleeps through, but I’m properly sleep-deprived at the moment and its a whole other ball game. It’s the fuzzy head that really bothers me. And trying to push a bit to get some things done around the house before November.

Excited: For Darcy’s birthday next month, Christmas, and getting somewhere organising my house 🙂